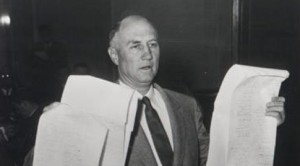 This morning I read an analysis of Indiana’s “Religious Freedom Restoration Act” in The Atlantic. It breaks down and highlights the fact that—despite Governor Pence’s claims to the contrary—Indiana’s law contains specific bits of language not found in the majority of similarly titled laws. Governor Pence has claimed that the Indiana law is the same as the federal RFRA. It’s not. He also claimed it was the same as the RFRA laws passed by other states. In fact, the Indiana law is similar only to the laws passed by Texas and South Carolina.

Disclaimer: This article is not intended as legal advice and The Golobish Group is not a law firm. We recommend you consult a lawyer if you want legal advice for contracts.

What Does This Mean for Clients?

Read your &#%?ing contracts! Read them carefully and understand them. If you can’t clearly unpack from the contract language the deliverables that you expect in the timeframe you expect—the contract may be suspect. Strongly consider if you want to sign an unclear, suspect contract.

In our experience, firms that have signed unclear, suspect contracts with vendors often don’t know what they are contractually obligated to receive. Typical frustrations include:

This thing auto renews?! You mean I’m stuck for another year?!

I thought I was going to get [insert quantity] and I only got [insert lesser quantity]! This thing doesn’t mention quantities?!

Wait. You mean to tell me that costs extra? I could have sworn that was included!

Since we’re not lawyers, our main objective is to make people aware of what’s out there in regard to contracts and to act responsibly.

What Does This Mean for Vendors?

Unclear contracts don’t only frustrate clients. They also frustrate teams responsible for delivering the items inside a contract. In their efforts to quickly close deals, sales people may not apply the same rigor to a contract that someone on the delivery team would employ. In our experience, this leads to contracts that miss essential information teams need to meet customer expectations. Typical items that sometimes go missing from contracts include:

A quick remedy to the above is to create contract templates and checklists that have top-down buy-in from execs through sales people. Granted, this adds a bit of bureaucracy to your organization that will slow you down at first; however, as we all hopefully know by now: “Slow is smooth. Smooth is fast.”

The Golobish Group is a management consulting firm focused on increasing the performance of SMBs through disciplined use of business analytics, process and technology. Click here to contact the Golobish Group.

Want to join the discussion?
Feel free to contribute!

One of the Worst Phrases
Scroll to top